Skip to content
There's nothing like one of my books to keep you up at night. See why readers enjoy my novels and exclusive newsletters by clicking below.
Click to get my newsletter updates.

Private Investigator Ava Worthington and her partners head to the mountains to solve the death of a farmer’s son. Without local cowboy Cory Mortel’s protection, Ava won’t get the chance to follow leads as the killer tries to stop her investigation. But Cory seems reluctant to get involved.

Cory Mortel has retreated to the seclusion of the mountains after a personal disaster. The last thing he needs is to babysit a beautiful amateur detective and her friends. But Ava seems to attract danger, so Cory has no choice but to step in and protect her.

One suspect after another is cleared from Ava’s list until she’s sure she has the real killer targeted in her sights, but he’s hunting her, too–a dangerous fact when she’s distracted by her growing feelings for the handsome cowboy who’s there every time she needs him. How will Ava and Cory find the killer and admit their love before they are buried under a mountain of secrets.

Worthington Investigations is on another grisly case in the beautiful Blue Ridge Mountains.

When P.I. Shauna Pratley heads up the investigation for Christopher Newen, a rural firefighter, she wants only to solve his father’s murder, not fall in love.

Christopher Newen may be used to the blazes of fire but not the heat ricocheting between him and Shauna. He needs the team’s help but has no intention of letting flames ignite between him and the investigator…yet her protective nature and fun-loving personality draw him in more than he wants to admit.

How will they work together to find a killer without letting love get in the way? Will they have to admit maybe God has used the horrors of evil to bring them together for good?

Leah Kettridge’s writing career is over before the first book lands on the shelf, when a famous author has claimed she’s stolen his work. If it wasn’t for a story brainstorming luncheon with her sister, he’d have never overheard her conversation about the novel she was writing. Who will she ever trust again if not her most favorite writer? And what about the one fabulous date they had before she knew what a traitor he was?

Keenan Brinner has it all. He’s a best-selling author who’s only headed toward more greatness. And he must be the most gorgeous guy Leah’s ever seen. But he’s also a liar and a cheat.

When they end up at the same cabin to write, emotions explode. But an unexpected snowstorm traps them deep in the mountains. Is he bent on destroying her in more ways than one? How will love find them amidst all their anger and distrust?

Brooke Hollen’s hurtful past is threatening to swallow her. When rehab is her only chance at redemption, she runs straight to it. But she finds more than a twelve-step-plan. Residents begin to disappear. Is there a killer at the center or are some residents just dropping out?

Kyle Reston, a rehab resident, is halfway through his battle with the darkness of addiction. He wants to help Brooke, but would it be a mistake to trust him? His penchant for breaking the rules is a sign that things aren’t safe with him. Yet forbidden love calls Brooke with a whisper she can’t ignore.

How will Brooke turn to God—who she once believed to be a myth—when Kyle becomes a suspect? Is she in love with a killer?

Graduate student Maddie Clare is never talking to her ex-boyfriend Joze Evans or God again. Broken from her past and Joze’s betrayal, she must go home for her Aunt Lonna’s funeral. But after a run-in with a stalker, who insists Maddie knows the secret that had Aunt Lonna investigating him, she’s afraid for her life and must accept Joze’s protection.

As the stalker draws closer, how will Maddie and Joze face the past and their love that never died? And will Maddie stay out of the stalker’s grip long enough to figure out what secret he possesses? 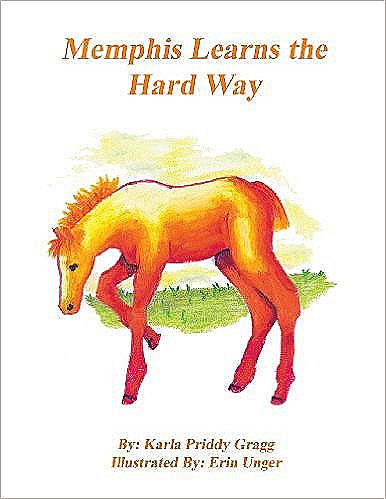 Memphis is a frisky foal who just loves to have fun running and bucking all over the fields. He was having the slide of his life until he learned the hard way how important it is to obey instructions.

This website uses cookies to improve your experience while you navigate through the website. Out of these, the cookies that are categorized as necessary are stored on your browser as they are essential for the working of basic functionalities of the website. We also use third-party cookies that help us analyze and understand how you use this website. These cookies will be stored in your browser only with your consent. You also have the option to opt-out of these cookies. But opting out of some of these cookies may affect your browsing experience.
Necessary Always Enabled
Necessary cookies are absolutely essential for the website to function properly. These cookies ensure basic functionalities and security features of the website, anonymously.
Functional
Functional cookies help to perform certain functionalities like sharing the content of the website on social media platforms, collect feedbacks, and other third-party features.
Performance
Performance cookies are used to understand and analyze the key performance indexes of the website which helps in delivering a better user experience for the visitors.
Analytics
Analytical cookies are used to understand how visitors interact with the website. These cookies help provide information on metrics the number of visitors, bounce rate, traffic source, etc.
Advertisement
Advertisement cookies are used to provide visitors with relevant ads and marketing campaigns. These cookies track visitors across websites and collect information to provide customized ads.
Others
Other uncategorized cookies are those that are being analyzed and have not been classified into a category as yet.
SAVE & ACCEPT